None Of Us Is As Good As All Of Us 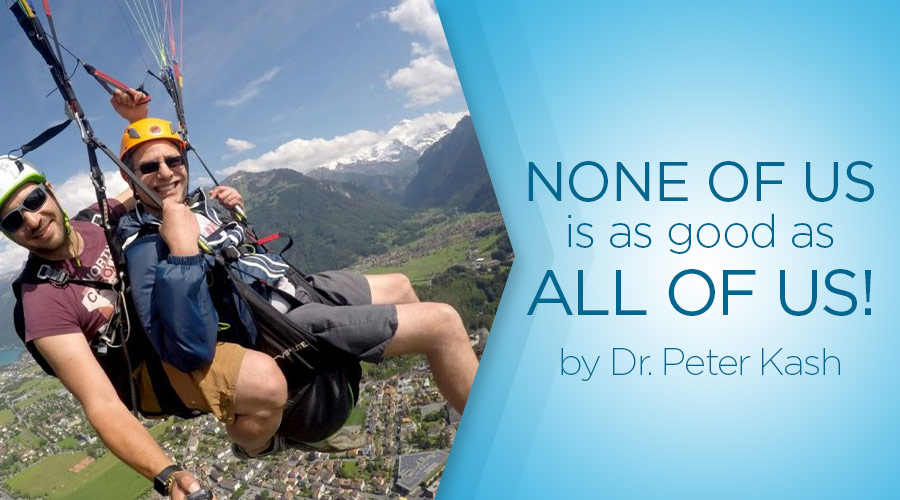 From the dawn of time “belonging” for most animal species is so much more than being part of something, it is the very basis of survival in this most competitive environment called life. Anthropologists will affirm through much research that when you are part of a cohesive group whether for keeping warm, seeking food, fending off predators or building a new company, the chances of success are significantly higher when working as a team with similar-minded peers.

Being together in a social, in-synced group is even more important with us humans. As published in Women’s Health Watch in a Harvard Medical School publication, it is clearly demonstrated that people live longer when having satisfying relationships. Conversely, having a lack of social cohesiveness is associated with depression and cognitive decline in later life. One study of 309,000 people who lacked strong relationships had an increase pf premature death from all causes by 50%.

This ties over to our work relationships where we spend more time with co- workers than with immediate family members. Working cohesively together helps to explain Randall Burt’s thesis on “structural holes.” The author explains that a proactive individual who can mediate between two connected groups  gains competitive knowledge in the process.  In other words, it’s about the sum being greater than the individual parts; it’s about building one another up. These are the type of people that Wayal is seeking to build the company both vertically and horizontally to meet the needs of the consumers. For the company to grow into an international power house, it is not just about the trusted products but the people who produce, market and distribute the products to the most important part of that ecosystem, the customer!

When you learn something from a customer, share that information. Survival and success depend on the cohesive group effort. Bill Gates says that “your most unhappy customers are your greatest source of learning.”  Another great 21st century service entrepreneur Tony Hsieh, the CEO of Zappos believes so much in customer service that he emphatically states that “customer service shouldn’t just be a department; it should be the entire company.”

Ecologists researching in the Serengeti, located in northern Tanzania, Africa, show that groups of animals that work cohesively and communicate effectively with one another caused a 90% reduction in kill rates from lions (the predator in the jungle similar to the competitor in the corporate jungle). Each affiliate in Wayal, in addition to working to be the best they can be, needs to support those working in their community.